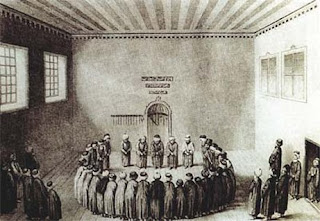 Sufi orders are socially important religious orders from the Muslim lands of Central Asia. Sufi orders provide Islamic teaching, religious guidance, and even armed protection to travellers. Students who have remained long enough with an order are given the opportunity to become fully-fledged initiates, after which step they are taught the esoteric teachings of the order. These esoteric teaching will also encompass the use of Islamic Magic (see pages 86-87 of the rule book).

Sufism is frowned upon by conservative Muslims because of its perceived influences of Buddhist and Hindu mysticism, and of Nestorian and Manichæan monasticism.

Sufis also have some rather unorthodox practices like meditation, and pilgrimages to the tombs of saints.
Posted by 賈尼 at 15:10
Email ThisBlogThis!Share to TwitterShare to FacebookShare to Pinterest
Labels: religion