The history of Islam in China is briefly described in the rule book, pages 39-40. The following is an expansion to what is already written in The Celestial Empire. 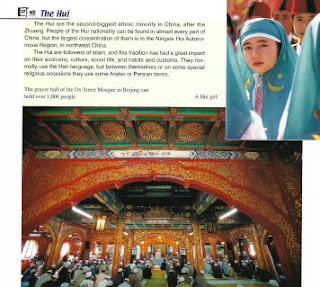 The first Muslims arrived to China during the 7th century AD, travelling along the Silk Road. They were warmly received by the Chinese government, and they did gain a few converts in the north-western provinces. However, the main impact of early Islam in China was in the coastal cities that were major trade centres, such as Canton [Guǎngzhōu], Zayton [Quánzhōu], and Yángzhōu, which probably already had their first mosques built during the Tang Dynasty. The Huáishèng Mosque in Guǎngzhōu, for instance, is one of the oldest in the world. In these ports, Muslims were not Chinese converts but Arab and Persian traders. The Judge Dee novel Murder in Canton is precisely set against such a cosmopolitan background.

As mentioned in the rule book, ethnic Chinese Muslims (Huí 回) — as distinct from the Turkic-speaking ethnic groups of the Northwest — are descended primarily from Muslims who migrated to China during the Yuán dynasty, and who intermarried into the surrounding population while converting them to Islam, while they in turn assimilated in all aspects of Chinese culture, keeping only their distinctive religion.

As mentioned in the rule book, the main areas inhabited by the Huí are Gānsù and Yúnnán, thus splitting the Huí into Northern Huí and South-eastern Huí. The former are more restless, having been at the heart of many rebellions, most notably under the Qīng. The Northern Huí have also maintained strong links with Central Asian Islam, in particular with Central Asian Sufi schools and orders. Despite these links, the Northern Huí have also developed their own traditions, like synthesising Daoist teachings and martial arts practices with Sufi philosophy. The South-eastern Huí, on their side, have a much longer tradition of synthesising Confucian teachings with the Sharia and Koranic teachings, and of co-operating with the authorities. The South-eastern Huí have a history of contributing to the army and to the Confucian officialdom. The famous Chinese admiral Zhèng Hé, for instance, was a Huí from Yúnnán.

The Míng dynasty sees the rapid decline in the Muslim population in the sea ports because of the closing of all seaport trade with the outside world. However it also sees the rise of Muslim military generals, and the establishment of centres of Muslim learning in China. The Míng dynasty also gives rise to the already-mentioned admiral Zhèng Hé.

Muslims in China proper are given relative freedom by the authorities, with no restrictions placed on their religious practices or freedom of worship, and being normal subjects of the Emperor. Immigration slows down drastically, however, and the Muslims in China become increasingly isolated from the rest of the Muslim world, gradually becoming more Sinicised, adopting the Chinese language and Chinese dress. During this period, Muslims also begin to adopt Chinese surnames, e.g., Mǎ (馬) for Muhammad, as mentioned on p8 of the rule book.

As mentioned on p40 of the rule book, the Qīng dynasty is both a period of expansion (most notably of the Naqshabandi Sufi order) and of hardships (the 19th century rebellions and massacres) for the Huí. It is also a period of re-established links with Central Asia; many Huí migrate or flee to Sogdiana and Turkestan under the Qīng.

An interesting characteristic of the Huí is the ménhuàn (門宦), which is a Chinese-style Sufi order. Ménhuàn are thought of having originated from a synthesis of Confucianism and the clan system of China (see p101 of the rule book) with the Sufi orders. Ménhuàn are ruled by hereditary sheikhs.
Posted by 賈尼 at 11:49
Email ThisBlogThis!Share to TwitterShare to FacebookShare to Pinterest
Labels: religion