from a suggestion on G+ by Joshua Bearden; text from Wikipedia 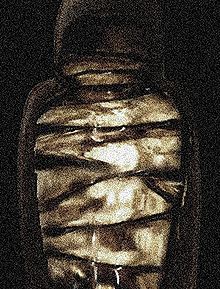 Mellified man, or human mummy confection, was a legendary medicinal substance created by steeping a human cadaver in honey. The concoction is mentioned only in Chinese sources, most significantly the Běncǎo Gāngmù (本草綱目) of the 16th-century Chinese pharmacologist Lǐ Shízhēn (李時珍, 1518-1593). Relying on a second-hand account, Lǐ reports a story that some elderly men, nearing the end of their lives, would submit themselves to a process of mummification in honey to create a healing confection.

This process differed from a simple body donation because of the aspect of self-sacrifice; the mellification process would ideally start before death. The donor would stop eating any food other than honey, going as far as to bathe in the substance. Shortly, his faeces (and even his sweat, according to legend) would consist of honey. When this diet finally proved fatal, the donor's body would be placed in a stone coffin filled with honey.

After a century or so, the contents would have turned into a sort of confection reputedly capable of healing broken limbs and other ailments. This confection would then be carefully sold in street markets as a hard to find item with a hefty price.
Posted by 賈尼 at 16:36 No comments:
Email ThisBlogThis!Share to TwitterShare to FacebookShare to Pinterest
Labels: background

Leprosy in East Asia is believed to be caused by (a) bad geomancy or (b) bad karma. People with leprosy are marginalised and discriminated against. Lepers are restricted to living in leper colonies, remote villages isolated from the rest of the population, or even secluded on islands (esp. in Korea). Lepers are deprived of their inheritance rights.

Because of fear, stigma, and revulsion toward lepers, the latter may travel quite unhinderedly— constables or guards, for instance, will refuse to search their body and belongings. On the other hand, what explanation can they provide for not being restricted to their colony?