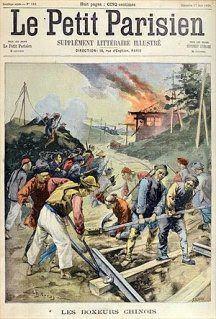 The term Yìhéquán (義和拳, literally Fists of Righteousness and Harmony), already in use at the beginning of the 19th century, designated a secret society from within the ranks of the White Lotus Society (see p94 of the rule book). Its members practised wǔshù for both physical and moral improvement purposes, hence the moniker "Boxers" given to them by the Westerners.

About 1898, the Yìhéquán starts agitation in North China, and manifests itself through attacks against Western missionaries who are trying to convert Chinese peasants to Christianity and to impose Western values to the extremely traditionalist Chinese rural society.

In 1900, a few thousand Boxers lay siege to the foreign legations' compounds in Běijīng for 55 days, thus triggering a foreign military intervention. The combined military forces of Austria-Hungary, France, Germany, Italy, Japan, Russia, the United Kingdom, and the United States (the Eight-Nation Alliance, bāgúo liánjūn 八國聯軍) quickly suppress the Boxers, for whom the use of firearms is taboo.

During the intervention of the Eight-Nation Alliance, the Anglo-French Seymour column, which enters Běijīng on 14 August 1900, ransacks the Summer Palace. Also, the Imperial Court has to flee to Xī'ān 西安. Both events foreshadow the demise of the Qīng Dynasty.

This is what a Western eye-witness wrote about the Boxer Uprising in 1904:

The now famous Boxers were members of two of the secret societies which have long flourished in China. To the Chinese they are known as League of United Patriots, Great Sword Society, Righteous Harmony Fists Association and kindred names. Originally, they were hostile to the foreign Manchu dynasty. When Germany made the murder of two Roman Catholic missionaries a pretext for pushing her political ambitions, the Boxers naturally arrayed them selves against them. As the champions of the national spirit against the foreigners, the membership rapidly increased. Supernatural power was claimed. Temples were converted into meeting-places, and soon excited men were drilling in every village.

The real ruler of China at this time, as all the world knows, was the Empress Dowager, who has been characterised as "the only man in China". At any rate, she is a woman of extraordinary force of character. She was astute enough to encourage the Boxers, and thus turn one of the most troublesome foes of the Manchu throne against the common enemy, the foreigner. Under her influence, the depredations of the Boxers, which were at first confined to the Shāndōng Province, spread with the swiftness of a prairie fire, until in the spring of 1900 the most important provinces of the Empire were ablaze and the legations in Běijīng were closely besieged. In the heat of the conflict and under the agonising strain of anxiety for imperilled loved ones, many hard things were said and written about the officials who allied themselves with the Boxers. But Sir Robert Hart, who personally knew them and who suffered as much as any one from their fury, candidly wrote after the siege : "These men were eminent in their own country for their learning and services, were animated by patriotism, were enraged by foreign dictation, and had the courage of their convictions. We must do them the justice of allowing that they were actuated by high motives and love of country," though he adds, "that does not always or necessarily mean political ability or highest wisdom."

Posted by 賈尼 at 12:26
Email ThisBlogThis!Share to TwitterShare to FacebookShare to Pinterest
Labels: background, Qing