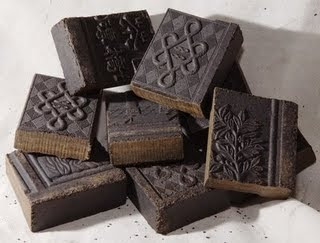 Tea bricks were the sole form of tea produced and used in Imperial China prior to the Míng dynasty. Each brick weighed about 100g~400g and was thus easily transported, sold or traded. Many such bricks were carried along the Silk Road, or across the Indian Ocean.

In isolated places within Imperial China, as well as in Inner Asia and in Siberia, tea bricks were used as currency.

The various steps in the preparation of tea bricks were all under the control of various guilds who had a monopoly.

Because of the toughness of the bricks, they have to be ground into fine powder before tea can be consumed. Also these bricks are often toasted over a fire to kill insects and moulds. As a result, the taste of tea before the Míng must have been completely different from what we know today.
Posted by 賈尼 at 23:36
Email ThisBlogThis!Share to TwitterShare to FacebookShare to Pinterest
Labels: background, Song, Tang, Yuan