Let's make one thing clear: there aren't any fortune cookies in China. There've never been any, there'll never be any.

So please no fortune cookies in Celestial Empire games.
Posted by 賈尼 at 10:38 No comments:
Email ThisBlogThis!Share to TwitterShare to FacebookShare to Pinterest
Labels: miscellaneous

I have already posted about Saṃsāra, the Buddhist cycle of birth, life, death, and rebirth. As explained in that post, it is every living being's lot to live, die, and be re-born in one of the "six destinies": deity, human, asura, animal, hungry ghost, or hell-dweller.
My post also featured quite a simple picture of this wheel of reincarnation.

Now I have found another picture of the wheel of saṃsāra, on a Buddhist blog that I follow, which in my opinion explains it even better: 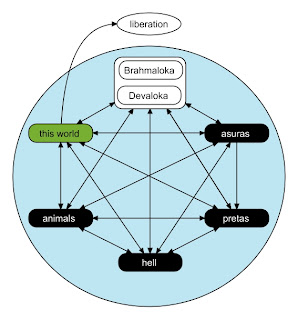 The black arrows indicate the various possibilities of birth, life, death, and rebirth. It is apparent from the picture above that life in any one of the six destinies can lead to rebirth in any one of the six destinies, depending on one's behaviour vis-à-vis the five precepts and the ten good deeds (going "up") and the ten evil deeds and the five heinous crimes (going "down").

An interesting feature of the picture above, compared with the one in my earlier post, is that it also shows that nirvāna, i.e., liberation from the wheel of reincarnations, is possible -- it is actually the aim of Buddhism.

Now an even more interesting thing about the picture above is that it clearly shows that although the abode of deities (labelled Brahmaloka and Devaloka here) is "higher" than the world of men,  nirvāna may only be achieved from the latter.