I've found this picture on G+, made a search through Google Images to try and find out whence it came to give due credit, but to no avail. I wish I knew if there were other awesome pictures like this one. It's a vaguely East Asian-looking hobgoblin. This looks very inspirational for a Chīmèi (TCE p113).

I especially like the extra detail like the darkness character (闇) on the forehead of the Champion. It could be a spell matrix or something like that.
Posted by 賈尼 at 10:36 No comments:
Email ThisBlogThis!Share to TwitterShare to FacebookShare to Pinterest
Labels: creature 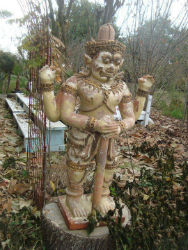 Phadaeng Nang Ai is another tale with significant potential. It’s a love triangle between the Nāga prince Phangkhi, a human princess named 'Aikham', and the human king Phadeng. The aspect of interest for Lovecraftian writers is the revenge of the Nāga king, Suttho, who leads an army of Nāga to kill everyone in King Phadeng’s realm for eating Prince Phangkhi. The Nāga king seizes Princess Aikham to live in the fabled underwater Nāga city of Badan. King Phadeng’s solution is to end his own life so he can become a ghost king who rallies a ghost army to seize his beloved back. If you can’t work with that, turn in your elder signs.
Posted by 賈尼 at 15:45 No comments:
Email ThisBlogThis!Share to TwitterShare to FacebookShare to Pinterest
Labels: background, crossover, Ming, Qing, Yuan

Zomia is a very recent term — it was coined but in 2002 by a Dutch geographer — but it describes an age-old reality in Southeast Asia: the large swath of rugged and/or mountainous regions, stretching from the Tibetan Plateau through Yúnnán to the Western Highlands of Vietnam, which have almost always eschewed control by the neighbouring states, and which are home to a large diversity of peoples, languages, and religions. In gaming terms, this corresponds to the "dark" provinces on the bottom centre part of map No.1 on p28 of The Celestial Empire.

The most famous book having drawn upon the newly coined concept of 'Zomia' is The Art of Not Being Governed: An Anarchist History of Upland Southeast Asia. In it, Prof. Scott argues that [the following is from the Wikipedia article] the continuity of the ethnic cultures living there provides a counter-narrative to the traditional story about modernity: namely, that once people are exposed to the conveniences of modern technology and the modern state, they will assimilate. Rather, the tribes in 'Zomia' are conscious refugees from modernity itself, choosing to live in more primitive, locally-based economies. From the Preface:

[Hill tribes] seen from the valley kingdoms as “our living ancestors,” “what we were like before we discovered wet-rice cultivation, Buddhism, and civilisation” [are on the contrary] best understood as runaway, fugitive, maroon communities who have, over the course of two millennia, been fleeing the oppressions of state-making projects in the valleys — slavery, conscription, taxes, corvée labour, epidemics, and warfare.


Prof. Scott goes on to add that 'Zomia' is the biggest remaining area of Earth whose inhabitants have not been completely absorbed by nation-states, although that time is coming to an end. Though 'Zomia' is exceptionally diverse linguistically, the languages spoken in the hills are distinct from those spoken in the plains. Kinship structures, at least formally, also distinguish the hills from the lowlands. Hill societies do produce “a surplus”, but they do not use that surplus to support kings and monks. Distinction of status and wealth abound in the hills, as in the valleys. The difference is that in the valleys they tend to be enduring, while in the hills they are both unstable and geographically confined.

In addition, Prof. Scott maintains that many traits that are viewed in mainstream cultures as "primitive" or "backward", and used to denigrate hill peoples, are actually adaptations to avoid state incorporation, such as lack of a written language, shifting messianic religious movements, or nomadism. Their presence is absent from most histories, since, as Prof. Scott puts it, "it is the peasants' job to stay out of the archives."

As excerpted from the review of the book on the Freedom Press web-site: Many communities chose NOT to be part of these [budding] kingdoms because of various reasons – taxes, slavery, conscription, war, bonded labour and so on. Kingdoms were forcibly populated by less than holy methods. Marauding armies conducted regular sweeping exercises to capture people from fringe communities, villages and other remote areas, not only for slaves but also to populate the centres of kingdoms. Many rulers even resorted to providing special incentives, tax concessions etc to get the populations to stay, and to cultivate wet-rice because of its high yield per square kilometre. This way they could monitor the crops and claim them through taxes.

Even the Economist has published a lengthy article about this fascinating region and Prof. Scott's book. From the 11/02/2013 issue: The people of this ecologically and ethnically diverse region have taken refuge on either side of the [Sino-Burmese] border for centuries, according to various regional balances of power. For nearly as long they have frustrated attempts by both Burmese and Chinese governments to impose order. In The Art of Not Being Governed, Prof. Scott argues that 'Zomia' is the largest remaining region of the world not to have been fully incorporated into nation-states.

The Mongol invasions of the mid-13th century ended nearly 500 years' rule of an independent kingdom [the non-Chinese Kingdom of Dàlǐ] in what is today Yúnnán. Dynasties subsequent to the Mongols' Yuán have all continued to claim Yúnnán as a province—but administering it is another matter. Officials were often posted to the province as a form of punishment. They saw it as being a dangerous, disease-ridden backwater inhabited mostly by non-Chinese who stubbornly refused the officials' benevolent efforts to “civilise” them.

The Manchu conquest of China in the mid-17th century and the founding of the Qīng dynasty marked the beginning of an especially turbulent era in Sino-Burmese relations. Throughout the Qīng period, Yúnnán, and especially the Sino-Burmese frontier, became a haven for anyone eager to avoid unnecessary involvement with the state. It was a Wild West on the Mekong. Illegal miners, smugglers, fugitives and would-be warlords lived side-by-side with local ethnic groups, corrupt Qīng officials, and Burmese pirates. Conflicts were frequent and bloody.

The last claimant to the throne of the defeated Míng dynasty spent most of his reign on the run, with his court in tow. He finally fled into Burma seeking refuge. The Manchu army stormed across the border and demanded the Burmese king hand over his guest, to be executed, or else prepare to fight.

The Qīng empire also fought a series of border wars against the Burmese in the middle of the 18th century. They launched four invasions into Burma in the span of just a few years, each venture proving more disastrous than the one before. The Qīng commanders initially tried to hide the extent of their defeats. After each display of official incompetence the emperor grew more enraged until finally he unleashed the full fury of the elite Manchu bannermen against the Burmese king. So confident was the emperor in Manchu military prowess that even as his troops were mustering, he was already considering plans for how to incorporate a conquered and chastened Burma into the empire. Unfortunately for him, the Manchu troops were more adept at fighting their wars of conquest in the arid climate of Central Asia. Tropical heat and disease—especially dysentery—decimated their ranks in Burma. Hoping to spare his empire further humiliation, the emperor called it a draw. Two decades later, after trade and diplomatic relations had been restored between Burma and the empire, the emperor decided that, notwithstanding the evidence, the Qīng had won the war after all.

Subsequent Chinese governments would gain a modicum of control over Yúnnán. But even into the 20th century local leaders maintained a high level of autonomy, and the frontier continued to harbour its share of fugitives and rebels.
Posted by 賈尼 at 17:06 2 comments:
Email ThisBlogThis!Share to TwitterShare to FacebookShare to Pinterest
Labels: geography, Ming, Qing, Yuan
Newer Posts Older Posts Home
Subscribe to: Posts (Atom)