Waseda University has made available on-line a curious series of Japanese prints from the Edo period that depict various phases of flatulence-based warfare.

I wonder how this could translate to game mechanics for The Celestial Empire...

The series of prints is also downloadable as a PDF.
Posted by 賈尼 at 20:49 4 comments:
Email ThisBlogThis!Share to TwitterShare to FacebookShare to Pinterest
Labels: curio, Japan

A Fantastic Film And A New Sect 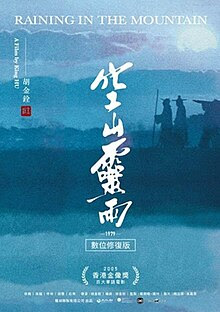 I needed a mental break from work the day before yesterday and so I watched one of my all-time favourite films, Raining In The Mountain (空山靈雨, 1979) by King Hu (Hú Jīnquán 胡金銓).

The film reminds me of those "behind closed doors" films, in which the action is restricted to a single room or locale — except that in this case the 'single locale' is a huuuuge maze-like monastery set in a remote mountainous area. The film was actually shot on location in South Korea. I wish I knew the name of the actual monastery because it is absolutely amazing.

The film is set in the Míng. The Three Treasures monastery keeps the only extant copy of a handwritten scroll penned by the famous Táng dynasty monk Xuánzàng, and two opposing parties of "adventurers" both try to steal the coveted treasure whilst the monks are themselves embroiled in a bitter succession struggle... I'd love to run this as a 2-GM, 2-party adventure, pitting each party against the other and both, simultaneously, against the monks who guard the treasure!

Anyway,  one of the minor protagonists of the story is the powerful lay master of a fictional Buddhist sect called the Vimalakīrti School*. He is fully dressed in Esoteric accoutrements and is constantly accompanied by a score female martial artists who act as his bodyguards. That's quite a cool NPC.

So here's the VIMALAKĪRTI SCHOOL for The Celestial Empire:

DESCRIPTION
Under the Míng, the state religion is Neo-Confucianism. The religious life of Buddhists turns increasingly towards isolated monasteries. It is hence difficult for lay practitioners interested in Buddhism, especially anybody with official duties, to be seen in the company of Buddhist priests or monks. As a result, Buddhist schools for laypeople start appearing. The Vimalakīrti School, named after the highly influential Indian lay practitioner Vimalakīrti, is one such school — albeit a fictional one.

MEMBERS
The Vimalakīrti School appeals to well-to-do, and usually aged, lay practitioners of Buddhism: mandarins, wealthy merchants, high-level officers. It also attracts nubile young women, recruited to serve as bodyguards for the most high-ranking members of the sect.

BENEFITS
Male Members
Male members enjoy the usual benefits of a high profile secret society (connections, relationships, e.g. a network of guānxi). They will always find a place to stay (or to hide!) in the monasteries that sponsor the sect, even if they call unannounced.
Female Members
Female members are taught all the powers pertaining to the Mìzǒngquán Martial Arts school.

OBLIGATIONS
Male members
Male members must always help the monasteries that are part of the sect's network, to the point of ignoring official requests, e.g., a mandarin receives an order to cancel the tax exemption from which a monastery has benefited: he will do his utmost not to enforce the order.
Female members
Female members are required to act as bodyguards for the most high-ranking male members of the sect.

*from the Wikipedia: “the Vimalakīrti Sūtra became one of the favourites in East Asian Buddhism. However, the sūtra was not used as an object of devotion, and no school was ever formed around it”
Posted by 賈尼 at 15:25 No comments:
Email ThisBlogThis!Share to TwitterShare to FacebookShare to Pinterest
Labels: film, gaming aid, Ming
Newer Posts Older Posts Home
Subscribe to: Posts (Atom)