Outlaws of the Water Margin 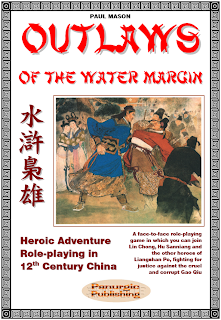 This post is about Outlaws of the Water Margin— no, not the book: the role-playing game. Set under the Sòng in the milieu of the derring-do outlaws of the Rivers and Lakes, this is in my opinion the best 'Oriental' role-playing game ever. It was actually a combination of Outlaws of the Water Margin, for the immersive cultural context, and of Rome: Life and Death of the Republic, for the system engine and the layout, that spurred my working seriously on The Celestial Empire, whose manuscript had been sleeping in draft format for such a long time, in the first place.

The only problem is that Outlaws of the Water Margin has never been published. Paul Mason started to work on it years ago (before widespread use of the internet, when there still were paper rpg fanzines) and, Paul being the procrastinating perfectionist that he is, the fully-fledged game never saw the light.

Some draft versions of it did circulate as PDFs generously handed out by the author, but alas there isn't much left online.

Draft versions of the main chapter are available here. I don't know if these are the latest PDFs that have circulated, but it is a good start. Paul would also often discuss progress in the game in the pages of imazine, the fanzine that he edited and published until 2002.
The gaming system was extremely simple, efficient, and elegant. Success of an action would depend on an ability plus a modifier and the roll of 2D6 against a given difficulty; in case of success, the highest of the 2D6 would also give the degree of success. Today this is the bread-and-butter of a lot of games, but at the time (the mid-90s, when elegant design and a single mechanism to cover all game-related actions were almost unheard-of) this was quite a revolution.The game also stressed the importance of a PC's family and guānxi, again at the time when this was not exactly what game designers had in mind. Wealth was an abstract measure, not the exact computation of how many coppers and silvers the PC had amassed; again, something really, really revolutionary at the time.

Paul also made available the write-ups of a series of gaming sessions, which have also been extremely inspiring when I was writing TCE. The write-ups are available here.

Viktor Haag is known to have GM'ed an Outlaws of the Water Margin campaign, whose sole [as far as I know] campaign log-cum-fanzine is available here.

If you find more information about Outlaws of the Water Margin, please let me know!