Posted by 賈尼 at 13:33 No comments:
Email ThisBlogThis!Share to TwitterShare to FacebookShare to Pinterest
Labels: background, military, Ming, Qing

Posted by 賈尼 at 13:30 No comments:
Email ThisBlogThis!Share to TwitterShare to FacebookShare to Pinterest
Labels: background, military, Song, Yuan

Posted by 賈尼 at 13:26 No comments:
Email ThisBlogThis!Share to TwitterShare to FacebookShare to Pinterest
Labels: background, military, Tang

Posted by 賈尼 at 13:24 No comments:
Email ThisBlogThis!Share to TwitterShare to FacebookShare to Pinterest
Labels: background, military

The silver standard and Chinese currency

The following is all from Wikipedia

China had long used silver ingots as a medium of exchange, along with the cast copper-alloy cash. The use of silver ingots can be traced back as far as the Hàn dynasty. But prior to the Sòng Dynasty, those silver ingots were used mainly for hoarding wealth. During the Sòng Dynasty, though first time in history the government became the sole issuer of paper currency after 1024, cast coins and silver ingots were still used as a medium of exchange. In the Chányuān Treaty, signed with the state of Liáo in 1004, Sòng China agreed to pay an annual indemnity or tribute of 100,000 tael of silver and 200,000 bolts of silk. This was the first time bulk silver in tael (Chinese: 銀兩) was used as indemnity in a treaty with a foreign power. Silver ingots had a shape similar to a boat or a Chinese shoe during the Yuán Dynasty. This became an ordinary shape for silver ingots during the following centuries.

The use of silver as a medium of exchange was very established at the time of the Míng Dynasty. Paper money was issued as monetary standard at the beginning of the dynasty. But due to the rapid inflation, the issues were suspended around 1450, although notes remained in circulation until 1573 (see Chinese currency). Meanwhile, silver was very much available through foreign trade with the Portuguese and the Spanish, beginning in the 16th century. The great taxation reform by Zhāng Jūzhèng (張居正) in 1581 simplified the taxation and required all the tax and corvée to be paid in silver. This can be seen as an indication of the firm position of silver in the monetary system of the Míng. But the reform would not have been a success or even feasible if the enormous amounts of silver were not available through the trade and imports from America, mainly through the Spanish.


During the Qīng Dynasty, silver ingots were still used, but various foreign silver dollars had become popular in the southern coastal regions through foreign trade since the mid-Qīng era. It was apparent that the silver ingots became awkward and more complicated to use vis-à-vis the foreign silver dollars, which could be counted easily, given their fixed specification and fineness of silver. However, the Qīng dynasty very much resisted the idea of minting a silver coin of their own. It was not until late Qīng, in 1890, that the first circulating silver coin was introduced by Guǎngdōng province [in South China]. The coin was at par with the Mexican Peso, and soon this issue was emulated by other provinces. For these silver coins, the tael was still seen as the proper monetary unit, as the denomination of the coins were given as 0.72 tael (specifically: 7 mace and 2 candareens; see p20 of The Celestial Empire). The equivalent monetary unit yuán (圓) hadn't appeared yet. Note for the treaties signed between the Qīng dynasty and other countries the indemnities were all in taels of silver, except for the Treaty of Nanking, where the silver dollar was indicated. It was not until 1910 that the yuán was officially announced as the standard monetary unit. The yuán was subdivided into 10 jiǎo (角) or 100 fēn (分), and specified as 0.72 tael of 90 per cent fine silver.
Posted by 賈尼 at 15:24 No comments:
Email ThisBlogThis!Share to TwitterShare to FacebookShare to Pinterest
Labels: background, Ming, Qing, Song, Yuan

'The Civilization of China' by Herbert Allen Giles 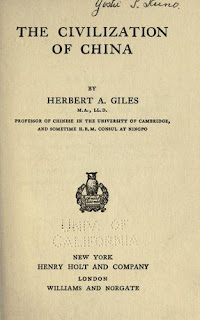 The book The Civilization of China by the noted Sinologist is available for free on the internet on a variety of web-sites. I have found this site easy to peruse.

Even though it is somewhat centred on the Qīng era, this book is a very recommended read for gamemasters and players of The Celestial Empire.

From the Preface:
The aim of this work is to suggest a rough outline of Chinese civilisation from the earliest times down to the present period of rapid and startling transition.
It has been written, primarily, for readers who know little or nothing of China, in the hope that it may succeed in alluring them to a wider and more methodical survey.
H.A. Giles
Cambridge, 12 May 1911