Alephtar Games have unveiled the cover of their upcoming steppe nomads BRP supplement, titled Wind on the Steppes, on their Facebook page: 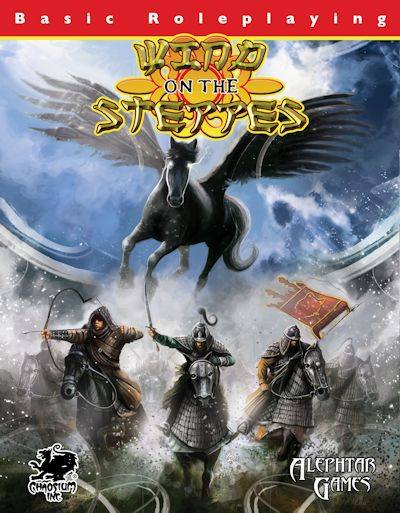 The art is by famous Italian fantasy artist Riccardo Rullo. At the moment, the exact availability date and retail price are still undisclosed.

Posted by 賈尼 at 15:22 No comments:
Email ThisBlogThis!Share to TwitterShare to FacebookShare to Pinterest
Labels: industry, nomads, supplement

In the 15th century, the Japanese Empire is officially a tributary state of Míng China. In reality, Japan isn't ruled by its emperor, impoverished and restricted to a ceremonial role, but by its military commander-in-chief or shōgun (将軍). China does not hold any kind of real power over the shōgun either.

The office of shōgun stays within the Ashikaga clan. The Ashikaga shogunate is also called the Muromachi period of Japan because the shōgun resides in the Muromachi district of Kyōto (京都). The shogunate is a semi-hereditary position: upon the death of a shōgun, the male members of the clan fight or manoeuvre to obtain the title; each contender is supported by various other feudal clans who have an interest in his victory. In the second half of the 15th century, one of these succession contests escalates into a full-blown civil war, known as the Ōnin War, which ends in 1477 leaving Japan bled white and without a clear-cut winner.

In the early 16th century, even though Japan enjoys a relative period of peace after the hardships of the Ōnin War, the country is divided and is effectively experiencing a form of “low-intensity” feudal anarchy:

Should the GM decide to set his game in early 16th century Japan, adventurers will have an easy time finding jobs as caravan guards, bodyguards, spies, assassins, etc.

With travel between provinces having become dangerous, roads are deserted, and supernatural creatures can reclaim the wilderness…

Sorry; I do not have much to post these days (busy with the new game), so I am simply posting inspirational pictures.


By the way, the upcoming Wind of the Steppe BRP book by Alephtar Games will have detailed rules for shamans.
Posted by 賈尼 at 22:17 No comments:
Email ThisBlogThis!Share to TwitterShare to FacebookShare to Pinterest
Labels: inspirational, supplement
Newer Posts Older Posts Home
Subscribe to: Posts (Atom)