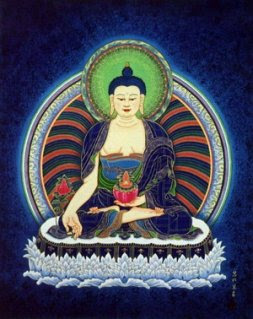 Bhaiṣajyaguru is is the Buddha of healing and medicine in Mahāyāna Buddhism, and as such he is one of the foremost Mahāyāna Buddhas. In China, he is often referred to as the master therapist, or as the physician Buddha.

When not in a trinity with Śākyamuni and Amitabha, Bhaiṣajyaguru may be depicted at the centre of his own trinity, flanked by his two serving bodhisattvas, Candraprabha 月光菩薩 to his left, and Sūryaprabha 日光菩薩 to his right. This trinity may itself be accompanied by the Twelve Heavenly Generals 十二神將, who are twelve protective yaksha who have vowed to protect the faithful from illnesses.