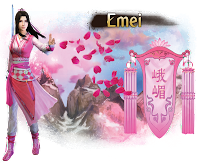 As written on p103 of The Celestial Empire, fictional organisations are a staple of Chinese myth and legend. The monks of Shàolín, for instance, may have an origin in real history, but the way they've evolved in the national Chinese psyche makes them closer to superheroes than to historical figures.

Something similar has happened with the Éméi Sect (Éméi Pài 峨嵋派). Wikipedia describes it as a fictional martial arts sect from Jīn Yōng's works, whereas the web-site of the Confucius Institute describes it as a real-world sect. Given the fanciful material in the article from the latter source, I am more inclined to side with wikipedia. Anyway, this is not too important in a role-playing setting; if it's fun, it must be included.

The Éméi Sect is briefly mentioned in Crouching Tiger, Hidden Dragon: when Zhāng Zǐyí's character smashes the furniture in the inn whilst single-handedly defeating numerous opponents she says: "I am the Invincible Sword Goddess, armed with the Green Destiny that knows no equal! Be you Lǐ or Southern Crane, bow your head and ask for mercy! I am the dragon from the desert! Who comes from nowhere and leaves no trace! Today I fly over Éméi. Tomorrow... I topple Mount Wǔdāng!".

Éméi Pài 峨嵋派 ("the Éméi Sect")
The Éméi Pài is one of the leading righteous sects in the world of the Wǔlín (p9 of TCE). It is named after the place where it is based, Mount Éméi (p25 of TCE), one of the Four Great Mountains of Buddhism. Although it is a Buddhist sect, the Éméi Pài has been described as working hand in hand with Daoist righteous martial artists in Chinese fiction. Again in Chinese fiction, the Éméi Pài is said to enrol both male and female recruits. It can be used by the GM as a vessel to introduce female (N)PCs to the game, thus ignoring the usual restrictions listed on p10 of TCE.

Period of time: Yuán to Qīng
Allegiance: Buddhism
Style: external (yáng)
Powers: same as Éméiquán (p69 of TCE)
Other Powers taught: Buddhist Magic — Mantra of Bhaisajyaguru
Special: in case of dire emergency, members of the Éméi Pài in good standing within the sect, and with a Buddhism Allegiance score of 70 at the least, may request succour from the leaders of the Sect. This request needn't be carried out by a messenger: the person sending out the request may do so through a successful Meditation skill roll  — the request will then telepathically be received on Éméi Shān. The GM will have to judge whether the request is or is not justified. Should it be justified and in line with the activities of the sect, Mount Éméi will provide appropriate help in the form of a group of Éméi Pài martial artists who will travel from the nearest available location to the threat. This will require of course some wotk from the GM (size and location of the party, statting its members...)
Posted by 賈尼 at 12:08
Email ThisBlogThis!Share to TwitterShare to FacebookShare to Pinterest
Labels: background, gaming aid, Ming, Qing, Yuan