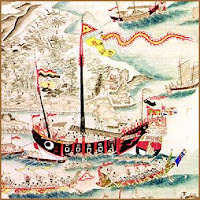 The Ryūkyū Archipelago is situated half way between Formosa and Japan, and is made up of several subtropical islands, the largest of which is Okinawa 沖繩.

The Ryūkyū Islands formed an independent kingdom known in Chinese since the fourteenth century as the Liúqiú Guó (琉球國). The Ryūkyū Kingdom played a central role in, and thrived from, the maritime trade networks of East and Southeast Asia: the Míng Chinese policy of hǎijìn (海禁, "Sea Bans") did not apply to the Ryūkyū Kingdom. The official language of the kingdom, as in much of East Asia, was Classical Chinese; the vernacular language was Ryukyuan, a language related to (but different from) Japanese. Although independent, the Ryūkyū Kingdom was a 'tributary state' in the Sino-centric Chinese worldview, much like Joseon Korea. Many Ryukyuan officials were descended from Míng-era Chinese immigrants.

The Ryukyuan religion was a mix of ancestor worship and shamanism. Due to the Chinese influence, Buddhism, Daoism, and Chinese folk religion came to influence Ryukyuan religious practice. Some characteristics of Ryukyuan religion that may be of interest for a Ryukyu-based game of The Celestial Empire:
1- All shamans are female, but these shamanesses are very specialised:
a- some communicate with, make offerings to, and, at times, channel ancestors, local gods and more powerful deities. They are central to any organised community. Even though they are, in game terms, shamanesses, socially speaking their role is akin to that of a priest.
b- some others communicate with the dead when in trance. They are closer to the standard Asian shaman in aspect, from a social point of view, and also in how a shamaness discovers her powers in her youth ('shamanic illness', near-death experience, visions...)
c- some others yet are fortune-tellers, or officiate at weddings or funerals, mixing Buddhist prayers with native rituals.
2- Spirits and magical creatures such as yāoguài (p112 of TCE), dragons (p120 of TCE), guardian lions (p126 of TCE), and ghosts, are very present and of paramount importance
3- An emphasis on the fabrication and the use of amulets, talismans, etc.
4- Lóngmài (ley lines) strongly influence Ryukyuan magico-religious practices.

Japanese were prohibited from visiting the Ryūkyū Islands without shogunal permission, and the Ryukyuans were forbidden from adopting Japanese names, clothes, or customs.

Under the Míng, however, the Ashikaga Shogunate sent Buddhist priests from major temples in Kyōto, and four Japanese Buddhist temples were constructed in the second half of the fifteenth century. Later, when the Ryūkyū Islands were controlled by the Satsuma domain of Japan, all forms of Buddhism other than Zen [Chán] and Shingon [Esoteric Buddhism] were proscribed by the Satsuma lord.

The nationhood status of the Ryūkyū Kingdom was totally compromised in 1609 when the Satsuma daimyō of southern Japan invaded the islands. Although in reality controlled by the Satsuma, the Ryūkyū royal government formally ruled until 1879, and the Kingdom retained its trading, religious, and cultural ties with China. In 1879, the Ryūkyū Kingdom was formally annexed by Japan; a governor was appointed to administer the islands; Japanese was introduced as the official language.
Posted by 賈尼 at 21:17
Email ThisBlogThis!Share to TwitterShare to FacebookShare to Pinterest
Labels: geography