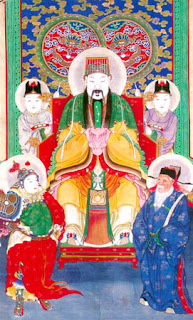 This post presents a few variations/additions to the elements provided in the rule book.

Originally, the supreme ruler wasn't called the Jade Emperor, but the Yellow Emperor (黃帝). The change occurred under the Táng.

Whatever his name, this supreme ruler is not really worshipped: he's revered throughout China's Confucian and Daoist temples, and joss houses. Once a year, on the ninth day of the first month, Daoist temples hold a Jade Emperor ritual (拜天公 bàitiāngōng, literally heaven worship) at which priests and laymen prostrate themselves, burn incense, and make food offerings.
The Jade Emperor's four assistant emperors are detailed below:

➀ Yándì (炎帝), the Flame Emperor, is much more of an historical figure than a mythological one, even though he is supposed to rule the southern cardinal direction.
➁ Shǎohào 少昊 is sometimes counted as an apotheosised emperor, sometimes as a mythologica figure. He rules the western direction.
➂ As written in the rule book, from the Míng onwards the nameless Northern Emperor (Běidì 北帝) becomes extremely popular, both in Daoism and in Chinese Folk religion. He is revered as a powerful god, able to control the elements (worshipped by those wishing to avoid fires), and capable of great magic. He is particularly revered by martial artists, and is the patron saint of Héběi, Manchuria and Mongolia ("the North").
➃ Tàihào 太昊 oversees the eastern cardinal direction. He is particularly worshipped on the sacred peaks.

A fifth assistant emperor can be added to the list: the Yellow Emperor (黃帝), who oversees the central cardinal direction. After his abdication, Zhuānxū 顓頊 becomes the fifth assistant.

In Daoism, the Jade Emperor governs all of the mortals' realm and below, but still ranks below the Three Pure Pellucid Ones (Sānqīng 三清, of which more will be revealed in another post). In Confucianism, the Jade Emperor is considered as a kind of abstract principle. In Chinese Folk Religion, on the contrary, he is really seen as the heavenly equivalent of the earthly ruler; this also explains the changes in his name— a ruler simply cannot be eternal, even if he is heavenly!