Original Buddhism (before it became corrupted by folk religion and devotional practices) did not contemplate any deities, but only enlightened beings, whose role was to lead mankind to enlightenment, and not to be worshipped. 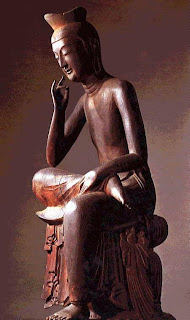 In Buddhism, each cosmic era is hence supposed to have its own Buddha who leads mankind to salvation. Śākyamuni is the Buddha of the present cosmic era. Maitreya (Mílè 彌勒) is the Buddha of the next era. Theoretically, people of our era should be following Śākyamuni's teachings, Maitreya's are for the future. However, Mahāyāna Buddhism has introduced the notion of mòfǎ (末法): with the passing of time, people do not understand Śākyamuni's teachings any longer and hence cannot attain enlightenment. As a result, Mahāyāna Buddhists have turned to other Buddhas for salvation: Amitābha, through devotional practices, or Maitreya, under the guise of a millenarian cult that expects the imminent advent of the future Buddha Maitreya to start a new era of universal salvation.

The cult of Maitreya starts in North India and spreads to China and Japan through Central Asia where it is extremely widespread before the rise of Islam.
In China, Maitreya's cult is popular under the Táng and the Sòng; after those dynasties, Amitābha and Avalokiteśvara (Guānyīn) become more popular, and Maitreya's millenarian influences become the sole province of syncretic sects, secret societies, and even rebellions.
Syncretic sects:
- White Lotus Society (p38 and p94 of TCE)
- other short-lived syncretic Buddhist/Manichæan sects
Secret societies:
- the various secret societies that have branched off the White Lotus Society (see p102 of TCE)
Rebellions:
- the Red Turban Rebellion under the Yuán
- the millenarian rebellion led by Pǔ Fǎ'è (普法惡) in Sìchuān, under the Míng
- the White Lotus Rebellon under the Qīng
- the Boxer Uprising under the Qīng
Posted by 賈尼 at 16:53
Email ThisBlogThis!Share to TwitterShare to FacebookShare to Pinterest
Labels: background, history, religion