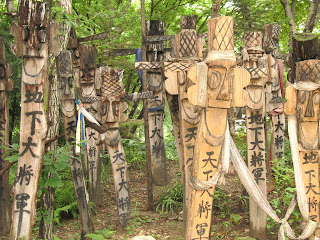 The most frequently-worshipped gods of Korean folk religion, for instance, Sanshin/Shānshén and Chilseongshin/Qīxīngshén, are two Shamanic deities. So are the Gashin/Jiāshén, a branch of deities believed to protect the various objects and rooms of the house.

A familiar sight in the vicinity of a Korean village is the series of jangseung/chángchéng (wooden totem poles) standing guard to mark the village boundaries and to frighten away evil spirits. They are also worshipped as village tutelary deities.
Posted by 賈尼 at 17:43
Email ThisBlogThis!Share to TwitterShare to FacebookShare to Pinterest
Labels: Korea, religion