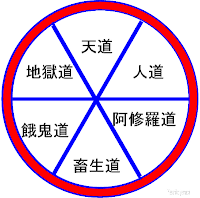 Saṃsāra, the cycle of birth, life, death, and rebirth, is a fundamental Buddhist concept originating from the Vedic religion, which is an ancient Indian religion. Obviously, after having been adopted by the Chinese, Buddhism underwent some adaptations to the Chinese mindset.

The round of birth and death actually involves upward or downward rebirth in different destinies, not rebirth along a circular path as around a wheel. Sentient beings transmigrate through a total of six modes of existence, called the "six destinies" (liùqù 六趣) or "six paths" (liùdào 六道). From highest to lowest, these are destinies as deity, human, asura, animal, hungry ghost, or hell-dweller. Rebirth into any of these destinies is based on one's adherence or non-adherence to the five precepts and the ten good deeds, and on one's commission on non-commission of the ten evil deeds (the opposites of the ten good deeds) and the five heinous crimes (killing one's father, mother, or an arhat; destroying the harmonious unity of the Sangha; and shedding a Buddha's blood). Results from practising the five precepts and the ten good deeds are classed into three levels – upper, middle, and lower – leading to rebirth as a deity, human, or asura, respectively. The ten evil deeds and the five heinous crimes are similarly classified into three levels of offence, and lead to rebirth as an animal, hungry ghost, or hell-dweller, respectively. Good deeds lead to birth in the three higher destinies, while evil deeds result in birth in the three lower destinies. After one has exhausted the good and/or bad retributions in one particular life, that lifetime will end, and another cycle of birth and death will commence. This transmigration within the six destinies, being born then dying, dying then being born again, is called the cycle of birth and death, or saṃsāra.