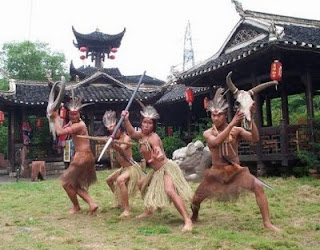 Bā 巴 was an ancient state in the eastern part of Sìchuān (四川). It reached the zenith of its power between 600 BC and 400 BC.
The Bā Kingdom was invaded and conquered by the Chinese in the Warring States period (戰國). After the conquest, its inhabitants stopped constituting a separate ethnic group, and became thoroughly Sinicised. However, it is claimed by some that the modern ethnic minority Tǔjiā 土家 people (who speak an isolated Tibeto-Burman language) trace their origins back to the Bā people.
Under the Míng and the Qīng, the Tǔjiā were given an autonomous status within the Chinese Empire, whereby they were ruled by their own chieftains in exchange for providing troops whenever they were needed, to quell local revolts or to fight against the Wōkòu.
Posted by 賈尼 at 11:57
Email ThisBlogThis!Share to TwitterShare to FacebookShare to Pinterest
Labels: background, geography