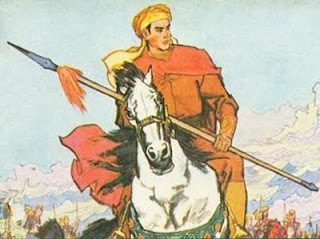 The Niǎn 捻 Rebellion is one of the many rebellions that brought economic devastation and loss of life at the end of the Qīng 清.

The uprising started with popular agitation brought about by a secret society, which may or may not have been linked to the White Lotus Society (see p94 of the rule book). The rebellion took place in northern China from 1853 to 1868; the most heavily affected areas were the provinces of Shāndōng 山東, Hénán 河南, Ānhuī 安徽, and Jiāngsū 江蘇 [roughly corresponding to the eastern part of "North China" and to the northern part of "Lower Yángzi" on the map on p28 of the rule book].

The Niǎn rebels sport long, loose hair, in open contrast to the Qīng-imposed Manchu hairstyle (the waist-long braided pigtail). The Niǎn are excellent horsemen who, after each attack against imperial troops, retreat into their fortified villages. The Niǎn — and this will be their undoing — do not have a precise political goal; they are mostly unmarried, dispossessed young peasants, ruined merchants, starving scholars: the aim of their attacks is looting.
The Niǎn seldom co-operate with the Tàipíng 太平. But after the defeat of the latter and the establishment of the Treaties of Tiānjīn with the western powers, the imperial government devotes its full military forces to quell the Niǎn Rebellion.
Posted by 賈尼 at 11:56
Email ThisBlogThis!Share to TwitterShare to FacebookShare to Pinterest
Labels: background, Qing