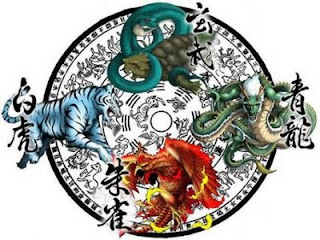 As written on page 52 of the rule book, Geomancy (fēngshuǐ 風水) is the art of adjusting the position and the orientation of buildings, tombs, and even fields, in relation to the magnetic compass, to the physical features of a given site, and to the nearest lóngmài (龍脈, the places where the qì 氣 of the earth flows strongest).

However, on page 62 the skill of Geomancy is mostly rendered as the mere ability to detect lóngmài.

In keeping with the list of abilities subsumed under the profession of Geomancer, and in order to beef up the profession, this post proposes a few more options in the use of the Geomancy skill.

1. A careful (3D6 minutes) examination of a given locale may give away clues as to any piece of furniture that may have been moved, or any modification that a room may have undergone. This obviously only applies to Civilised (Chinese, Korean, Vietnamese) locales, since the Barbarians do not follow the rules of fēngshuǐ when building their cities.

2. In the countryside, successful use of the Geomancy skill may indicate the presence of an underground stream of water, of a large cave beneath the surface, etc.