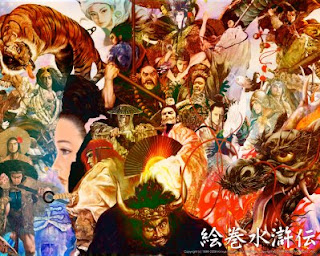 The Water Margin is a picaresque novel written under the Míng 明 but based on material from the Yuán 元. It tells the many adventures of the famous Shāndōng 山東-based “108 outlaws” of the Sòng 宋. The outline of the story and some of the characters have vague historical bases, but most of the stories-within-the-story present in the narrative of the novel are based on early popular tales.

The Water Margin is a much beloved novel, as are its characters, in all the Chinese sphere of influence in East Asia. It is also one of the Four Great Classical Novels of Chinese literature. The novel is remarkable for its many protagonists and for the way in which its early chapters appear as independent narrations centred on one given character, which slowly get intertwined as the main story unfolds. It is highly recommended that any GM of The Celestial Empire read the book to get a taste for the way the Chinese envision adventurous characters. Players are also advised to read the book to capture archetypes for Chinese heroes.

As mentioned above, the novel begins with what may appear as independent stories in their own right; however, all these stories end up with the protagonist being framed by a greedy official or an unscrupulous merchant and having to seek refuge in the shadow world of the Rivers and Lakes (Jiānghú 江湖, see page 9 of The Celestial Empire). Once the main characters have become outlaws, the main character of the Water Margin, Sòng Jiāng 宋江, a lowly magistrate's clerk, makes his appearance in Chapter 18. The interesting thing with Sòng Jiāng is that he is not strong (he's not a martial artist), he is not particularly bright (he's but a petty official), he is not heroic (he has fled because he has killed a woman); however he embodies yìqi 義氣 (see page 9 of The Celestial Empire) so well by his many actions that he attracts all the other outlaws until they form a sworn brotherhood of 108. This is the apex of the Shāndōng heroes. After several unsuccessful military assault against their stronghold, the Emperor must eventually grant them amnesty. The second part of the novel starts with the bandits now a fully-fledged military unit of the imperial army. Unfortunately, all their old foes conspire to have the Emperor send them quell revolts or fight nomad invaders, until only a handful of the original 108 outlaws are left alive.

The best English language version is probably Sidney Shapiro's Outlaws of the Marsh. For those who read French, I strongly recommend the superior French translation Au bord de l'eau by Jacques Dars.
Posted by 賈尼 at 12:54
Email ThisBlogThis!Share to TwitterShare to FacebookShare to Pinterest
Labels: background, Song