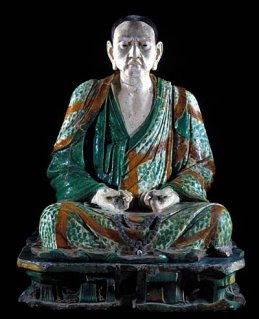 As explained on p37 of The Celestial Empire, an arhat is, in Hīnayāna Buddhism, a person who has reached the state of nirvāna and who has thus managed to escape the cycle of suffering and rebirth: saṃsāra.

Since the main form of Buddhism practised throughout Imperial China is Mahāyāna rather than Hīnayāna Buddhism, arhat are much less important in Chinese religion than in early Buddhism. However, specific groups of arhat are often portrayed in Chinese arts, such as the Sixteen Arhat or the Eighteen Arhat.

The Five Hundred Arhat would adorn richer and larger temples, often under the shape of man-sized statues each having their own different features, to show that the temple had the means to hire such a large group of talented artists. There are also instances where the Five Hundred Arhat would be represented in sets of paintings, again to decorate rich and large temples.

In Chinese: 羅漢, Romanised as luóhàn
Posted by 賈尼 at 11:45
Email ThisBlogThis!Share to TwitterShare to FacebookShare to Pinterest
Labels: religion