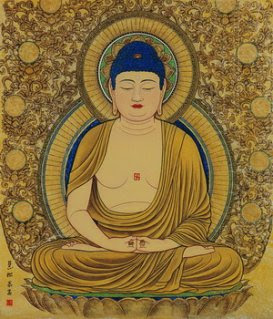 The Buddha of Infinite Light, Amitābha is the most popular Mahāyāna Buddha after the historical Buddha himself, and possibly the most popular Buddha in folk religion. Amitābha possesses a paradise called the Pure Land, located in the western part of the universe, in which he welcomes anybody who was devoted to him during their life. Those reborn into the Pure Land (birth occurs painlessly through lotus flowers) will escape saṃsāra by receiving Amitābha's teachings.

Devotion to Amitābha starts spreading throughout China in the 4th century AD. In 402, the Chinese monk Huìyuǎn 慧遠 founds a Mahāyāna sect, which is the main precursor of both the White Lotus Society 白蓮 and Pure Land Buddhism 凈土.

Because of his popularity, Amitābha is very often depicted in Chinese art, and his statues and paintings are common throughout China in Buddhist temples. Amitābha is usually represented with thumbs touching and fingers together (see picture), either alone or flanked by two bodhisattvas.

Chinese name: 阿彌陀佛, Romanised as Ēmítuófó or Āmítuófó
Posted by 賈尼 at 09:34
Email ThisBlogThis!Share to TwitterShare to FacebookShare to Pinterest
Labels: religion