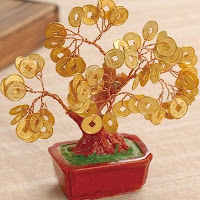 The Money Tree (摇钱树 yáoqiánshù) is a nature spirit embodied in an ancient tree. It is hard to tell whether it moves about and appears to its victims, or if it is incorporeal and only materialises before them. Whatever the actual truth, the yáoqiánshù usually only appears before lone travellers. The GM may use the Money Tree when the PCs are lost in a forest and have lost track of each other, when they are fleeing a group of bandits in the mountains and are scattered, etc. The important element is that the victim must be alone.

The yáoqiánshù will choose to appear in the vicinity of the PC whose total Daoism + Heterodoxy allegiance score is the lowest. A slight breeze will ensure that the victim will clearly hear the tintinnabulation of the golden cash-like fruits of the Money Tree. The latter will present itself as a large specimen of whatever tree is most common in the area, its branches heavy with large, cash-like fruits made of the purest gold. The victim will be able to collect enough gold to go up one Wealth level. The large coins will be in imitation of whatever currency was official 1d8×100 years before present (this time span is actually the age of the yáoqiánshù). If the coins happen to correspond to cash that was in circulation during an earlier dynasty, and if the PC figures out he should sell them to a collector, then the Wealth of the PC will go up two levels!

This wealth, however, is cursed. At some later time, the GM should devise an unfortunate event that will cause the PC to lose all the accumulated wealth and to suffer misfortune, e.g., some local nouveau riche challenges the PC to a display of wealth through building an exaggerated mansion, which will then collapse upon the PC. Or a local cash-broken magistrate will request the PC build a bridge, or a temple, or whatever, which will cost him all the accumulated wealth plus some more. Or a travelling member of the imperial court will have heard about the wealth of the PC and will ask the PC to offer him some costly present, which he won't even like; this incident will make a bitter enemy of said member of the court... You get the idea.
Posted by 賈尼 at 16:54
Email ThisBlogThis!Share to TwitterShare to FacebookShare to Pinterest
Labels: creature