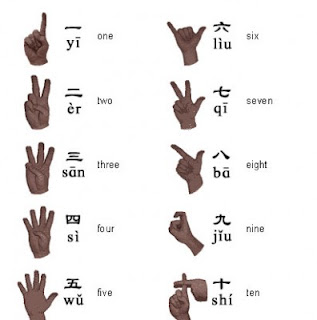 Because of the many dialectal differences in China, the Chinese have developed a method of using one's hands to signify the numbers 1 to 10.

Numbers 1 to 5 are, like in the West, simply signified through the number of fingers shown. Note, however, the slight differences with Western usage, most due to the Chinese not using the thumb, except for the number "5".

Numbers 6 to 10, contrary to Western usage, are signified by mimicking the relevant Chinese character using the position of the fingers as if they were character strokes (see picture).

In role-playing situations these number gestures can be used if the PCs have to communicate discreetly (e.g., during business negotiations), or if they are in a place where speaking is impossible (e.g., they are ambushing an adverse party and they need to communicate the number of people in the party), etc.

Obviously these number gestures could also be used to express larger numbers (seven could also mean seventy if the context is unambiguous; a "3" closely followed by an "8" could mean 38; etc.).
Posted by 賈尼 at 12:05
Email ThisBlogThis!Share to TwitterShare to FacebookShare to Pinterest
Labels: background, gaming aid