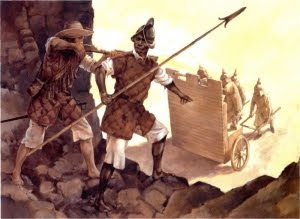 If the relations between the Portuguese and the Míng had been strained in the 16th century, they evolved much more positively in the 17th century.

Commercial wise, Macau remained the only European trade port in China until the wars of the 19th century, bringing much wealth to the Portuguese, and spawning a whole trading class of European-friendly Chinese in southern China: the compradores (itself a Portuguese word).

Military wise, the Portuguese were key in the reintroduction of cannon and firearms in China. Strangely enough, despite firearms having been invented in China, their use had much dwindled under the extremely conservative and extremely complacent Míng Dynasty. Here are a few key events:

1620: The Míng decide to use Portuguese cannon against the Tartars.
1621: Four guns and bombardiers are sent from Macau. Bombardiers turned back at Canton but guns let through.
1623: Board of War memorialises Emperor in favour of Portuguese gunners.
1624: Seven Portuguese gunners arrive in North China.

Although the turning point between the Míng Dynasty and the Qīng Dynasty is traditionally held to be the fall of Běijīng in 1644 (see p3 of The Celestial Empire), the fight between Chinese Míng loyalists on the one side, and the Manchu invaders and those Chinese troops who had rallied them on the other side, went on for decades; however, the death of Zhū Yóuláng, the last heir to the Míng throne, in 1662, and the defeat of Zhèng Chénggōng's forces by the Qīng in 1683 spelled the end for the anti-Qīng military movement, which would then turn into the anti-Qīng sentiment of many secret societies (see p102 of The Celestial Empire).

Zhū Yóuláng was based in South China, and he received much help from the Portuguese. One of the key battles of the Qīng campaigns in South China was the siege of Guìlín. Guìlín was held for the Míng loyalists by a detachment of Portuguese colonial troops, many of whom African slaves, who were surprisingly loyal, and often considered to be the best Portuguese troops. Even in the 17th century, they were still armed with halberds, or with sword and buckler.

The siege of Guìlín could make for an interesting historical Celestial Empire campaign, with the player characters on either side, and with many 'exotic' factions: Míng loyalists, Manchus, Chinese defectors from both sides, non-Hàn natives, and Portuguese colonial troops. The latter would be best described by the 'Foreign Devils' entry on p112 of Dragon Lines.
Posted by 賈尼 at 11:00
Email ThisBlogThis!Share to TwitterShare to FacebookShare to Pinterest
Labels: history, Ming, Qing