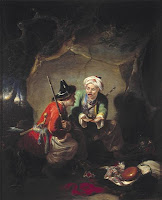 These two terms are not used by Asian peoples; however, since they often appear in European writings about North Asia, today's post is devoted to them.

Under the Yuán 元 and the Míng 明, a group of Islamicised and Turkicised Mongols called the Tatars ruled much of Central Asia. The Tatars exerted their rule either under the suzerainty of the Mongol Empire, or through their own khanates called hordes. By analogy with Tartaros (the underworld of classical mythology), and because of the great massacres brought on Central and Eastern Europe by the Tatars, most European peoples changed the name "Tatar" into "Tartar". This name was later applied to all Muslim and Turkic-speaking nomads of Central and Inner Asia, and then, under the Qīng 清, even to the non-Muslim and non-Turkic peoples, e.g., the Mongols, and the Manchus in China.

The name then obviously spread from the peoples to the land they inhabited.


East Tartary was the focus of much Chinese-Japanese-Russian rivalry under the Qīng (see my earlier post about Russian 'foreign devils').
Posted by 賈尼 at 10:27
Email ThisBlogThis!Share to TwitterShare to FacebookShare to Pinterest
Labels: geography, Ming, Qing, Yuan