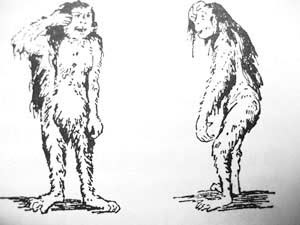 Several newspapers are currently running stories about the Yeti being for real — here's an example from the Guardian, a serious British newspaper.

The main difference with the usual Yeti stories is that in this case the creature does not inhabit the Himalayas but the Altai Mountains. In Celestial Empire gaming terms, this would place its home at the boundary between Western Siberia and Outer Mongolia.

Another difference is that apparently we're not talking about a brutish ape-like creature any longer, but about a cunning, more human-like creature, that has been able to keep its existence hidden from civilisation for centuries.

As a consequence, I would introduce the Yěrén (野人, this has traditionally been the name given to the Yeti in the Chinese language) to The Celestial Empire as a cunning, humanoid creature, possibly related to the Men of Leng of Lovecraft fame — if you favour this kind of cross-over. Yěrén could even be introduced as the waking world equivalents of the Men of Leng.

Spells:
Whatever spell a Yěrén knows will have been taught him by some "master" it serves/worships. This can be of particular interest in a cross-over Call of Cthulhu/Celestial Empire game, where said master can be a Moon-Beast, a priest of Nyarlathotep, or a cultist of the Black Lotus.

Hit Location Table: Use Humanoid.
Posted by 賈尼 at 16:54
Email ThisBlogThis!Share to TwitterShare to FacebookShare to Pinterest
Labels: creature, crossover