The Mystery of Dr. Fu-Manchu 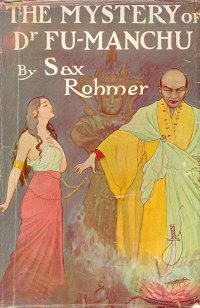 I have just finished reading this novel, and it has given me a nice idea for a scenario, or even for a fully-fledged campaign set under the Qīng. The book is set circa 1910, but by moving the action a few years back into the past, it can remain within the time frame of The Celestial Empire.

The idea is to play the plot of The Mystery of Dr. Fu-Manchu the other way round: the player characters are agents of Dr. Fu-Manchu who want to give the Foreign Devils a taste of their own medicine. They are smuggled to London, where they must murder evil Foreign Devils or abduct brilliant Western chemists or engineers and coerce them into working for Dr. Fu-Manchu, typically by kidnapping and threatening the relatives of the unwilling scientist.

Typical player characters would be: assassin-retainers, as the Doctor's personal retainers; former magistrates, who have witnessed the crimes of the Foreign Devils and who have not been allowed to try them because of extraterritoriality; martial artists opposing foreign imperialism and Christianity; defrauded comprador merchants seeking compensation through revenge; outlaws, such as members of xenophobic secret societies; scholars spurred by patriotism to helping Dr. Fu-Manchu; humiliated soldiers with an old score to settle.

Special challenges for Chinese characters in a Western land include: inferior armament, the language barrier, the impossibility of blending into the local populace, lack of access to supernatural aid...

Just like in the novel, the characters in the employ of Dr. Fu-Manchu would be well-advised to base their operations in the East End of London, which at the turn of the century was a poorly policed area with labyrinthine alleys and a large immigrant population.
Posted by 賈尼 at 11:41
Email ThisBlogThis!Share to TwitterShare to FacebookShare to Pinterest
Labels: Qing, scenario seed