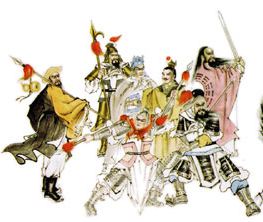 The Chinese Empire is huge, and, alas!, the Son of Heaven cannot guarantee the safety of his subjects in each corner of this vast expanse.

This is particularly true for travellers: the various troops and militias are stationed in the yámen of the major cities of the Empire, in the garrisons at the barbarian frontiers, and wherever enemy raids are expected. This leaves out huge swaths of land, amongst which the mountains — which the Chinese strongly dislike anyway.

Mountains are where banditry is rife. Any right-minded traveller will stay on the roads of the Empire and give the mountains a wide berth. However, for various reasons, most notably when they are in a hurry and want to try out a shortcut, some travellers do cross the mountains. And, unavoidably, they also cross the path of the bandits living therein.

This is when this small table comes in handy.