The Chinese have always hated the mountains and the seas. Chinese civilisation originated in the basin of the Yellow River (Huánghé 黃河), more exactly in the squarish area between the Yellow River and the river Wèi (渭河), which is located more than 1,000km from the nearest sea.

This squarish area is a natural plateau of fertile (if highly erodible) soil. Even if this plateau is high above sea level, there aren't any real mountains there. It is like a gigantic piece of upheaved plains.

Another early centre of Chinese civilisation was the upper basin of the river Huái (淮河), again a very flat area, and again far from any coastal area. 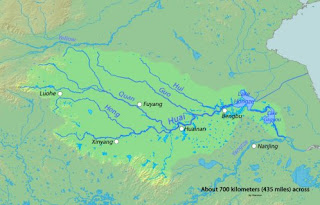 Over time, Chinese civilisation spread eastwards to Shāndōng (山東), and southwards to Sìchuān (四川) and to the river Yángzi (揚子江), as explained on page 19 of the rule book. However, the Hàn kept clear of the mountains and of the seas during this expansion phase. This explains why the vast majority of China's ethnic minorities are mountain dwellers.

Whereas Europe is dotted with old ports by the sea, and old cities situated on protective peaks, China's ancient cities are all plains cities, far from the sea. Shànghǎi, for instance, has really been created by the British and the French in the 19th century.