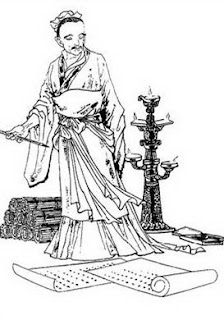 I have just bought Mythic Iceland by Pedro Ziviani. It is a Basic Role-Playing supplement designed to play in mediæval Iceland. Despite its title, Mythic Iceland is firmy set in real world history and is historically, linguistically, and culturally accurate. In that respect, it is similar to the Alephtar Games historical titles :)

The Celestial Empire features the skill of Divination (pages 59-62). Mythic Iceland similarly presents the skill of Prophecy (pages 206-208), which has a slightly different scope: instead of requiring to GM to come up with a cryptic sentence that somehow predicts future in-game events, it requires the player character using the Prophecy skill to try and give some input to the GM's game through the prophecy itself, i.e., it introduces player-driven narration. Also, the Mythic Iceland version of the skill is much more articulate, with scalable effects depending on the amount of power points spent by the player character.

After spending 1 Qì point, the diviner performs a divination ritual according to the tenets of his religion, and consulting the appropriate source; then the GM rolls against the character's divination skill (the result of the roll must remain hidden from the player since he has no idea whether the attempts to prophesy the future was successful or not).
with:

The table referred to above is the following one:


Example: a diviner attempts to prophesy what will happen to his brother who has set upon a dangerous endeavour in Bukhara with a band of fellow adventurers. The divination attempt involves a different person than the diviner: 2 Qì points. The divination attempt involves a precise person: +2 Qì point. The diviner would like the prophecy to involve death: cost×3. Total: a hefty 12 Qì points. The player successfully rolls against his skill and chooses the following prophecy: 'My brother kills the emir of Bukhara'. Now 12 Qì is a huge amount, but the GM may still think it's to easy to get away with it like that. That's where the GM may decide this will happen... several years in the future! maybe after the diviner's brother has escaped from a harrassing stay in the emir's penal labour camps...
Posted by 賈尼 at 23:30
Email ThisBlogThis!Share to TwitterShare to FacebookShare to Pinterest
Labels: additional rule