Note: part of the text below has been adapted from the relevant Wikipedia article

Yāshèng (厭勝) coins are a kind of special coin mainly made for ritual purposes. These coins are usually privately funded or cast, such as by a rich clan for their own family ceremony or, mostly under the Míng and the Qīng, issued by the imperial government for big festivals or for ceremonies like the emperor's birthday.
Yāshèng coins are not real currency, hence not legal tender, and cannot be used as a means of exchange in any commercial transaction. 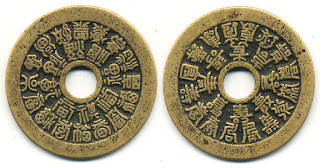 Yāshèng coins are heavily decorated, typically being engraved with complicated patterns and/or archaic characters. These inscriptions customarily hail the Immortals, the virtuous kings of the distant past, or Daoist masters. Wearing or carrying the coins is obviously supposed to somehow transfer virtue, luck or blessings onto the bearer.
Yāshèng coins have a long history, have been in use since well before the Táng, and are much sought after by antique collectors. They first appeared under the Western Hàn (3rd century BC), and under the influence of the School of Naturalists, as paraphernalia for necromancy, for propitious wishes, terrifying ghosts, lucky money, or even for bringing victory at war. Yāshèng coins have hence been dubbed "spiritual coins" by some Sinologists.

For Celestial Empire games, it is suggested that each set of Yāshèng coins should function like a unique magic item. The exact effects can be duplicated from the effects of the magic items described on p83-84 of TCE. Other sample effects are:
The gamemaster is encouraged to devise unique effects for any Yāshèng coins in his TCE campaign.

A successful Knowledge (Art History) roll will give basic information about a given Yāshèng coin, such as its period of time, the kind of usage it was destined to, etc. A critical success will give the exact scope and expected powers of the coin.
Posted by 賈尼 at 13:55
Email ThisBlogThis!Share to TwitterShare to FacebookShare to Pinterest
Labels: background, gaming aid