Of course you all know the 2000 wǔxiá film Crouching Tiger, Hidden Dragon by Ang Lee. The film was a huge box office success and helped spread knowledge of Chinese wǔxiá fiction to the ignorant Western barbarians (er, us). For me, it was the initial spark that would eventually lead to the publication of The Celestial Empire.

The scenario of the film was inspired by the fourth novel in a five-novel cycle written by Mainland wǔxiá novelist Wáng Dùlú (王度庐, 1909-1977). Unfortunately, as far as I know, none of the novels have been translated into English. There is a 'bootleg' translation available on this blog for those who are interested. 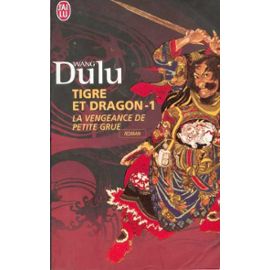 Luckily for us French speakers, the first two novels in the cycle have been translated into French; each of them in two halves, so that's four books in total. Sadly, it looks like the third to fifth novels will never be translated. I am currently reading the first half of the very first novel, 鶴驚崑崙 (La vengeance de Petite Grue), variously rendered into English as The Crane Startles Kūnlún or as Crane Frightens Kūnlún. It's really a fantastic telling of life in rural Qīng China, and of the relationship between the various people at the heart of Jiānghú (江湖), the parallel world of the "Rivers and Lakes" (see TCE p9), most notably between members of escort agencies (biāojú 镖局, see TCE p41). It also sheds light on gender relationship under the prudish Qīng, and explains how the men from the Rivers-and-Lakes could go about armed to the teeth even though it was theoretically forbidden.

Heartily recommended to anybody who runs or plays in a Rivers-and-Lakes or even merely in a rural TCE game.
Posted by 賈尼 at 11:37
Email ThisBlogThis!Share to TwitterShare to FacebookShare to Pinterest
Labels: film, miscellaneous, Qing