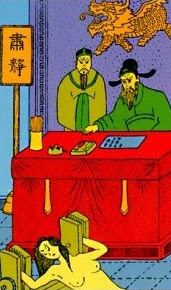 Via Monsters & Manuals, I was directed towards an extremely interesting web-site about 'alien' legal systems, amongst which, of course, Chinese Law. I'll let you peruse this fascinating web-site.

- The legal code itself is not so much an account of what is forbidden as an attempt to specify, for every possible offence, the proper punishment.

- Detention is not a punishment: people are only imprisoned whilst waiting for their judgement. Also, both accuser and accused are imprisoned; this is done to discourage people both from interacting with the legal system and from making false accusations (see also Note 1 below).

- Fines are not contemplated as punishment either, but only as a substitute for the actual penalty, if the family of the victim agrees.

- Ordinary punishments (from lightest to harshest):
- the cangue (to humiliate the culprit)
- various numbers of blows by the light or heavy bamboo
- penal servitude of various sorts and lengths of time
- life exile at various distances from the convict's home province (see Note 2 below)
- capital sentence (see Note 3 below)

- The key person of the Chinese legal system is the magistrate. The population of his district can range from 80,000 to more than 250,000; the magistrate functions as the single representative of imperial authority, a combination mayor, chief of police, and judge. He has obtained the position by first doing well in the examination for the civil service [an examination testing not legal knowledge or administrative ability but the applicant's literary ability and knowledge], and then performing well in administrative positions at a lower level. He is assisted in his duties by a staff of lower level officials, some his own employees who move with him from place to place, some permanently located in the district. One risk of putting so much power in one pair of hands is that the magistrate may take advantage of his position to build local support and thus convert the centralised bureaucracy into a de facto feudal system. One way of keeping that from happening is to forbid a magistrate from being assigned to his own (or his wife's) home district, and to shift magistrates from district to district every three years.

- By the mid-19th century, the Qīng are ruling a population of about 400 million and doing it primarily with a small bureaucracy of élite scholar-officials. One way of doing so is to sub-contract as much as possible of the job of controlling behaviour to other authority structures: the extended family, the lineage head, the village elders, the trade guilds, etc. (see Note 1 below).

1. “Shouted at and reviled by the magistrate, growled at and beaten by the constables, the position of the accused was a most unfavourable one indeed. Small wonder that having to appear in court was considered by the people at large as a terrible misfortune, an experience to be avoided if at all possible . … In general people tried to settle their differences as much as possible out of court, by effecting a compromise or by referring the case to one of the age-old organs of private justice, for example the council of the family- or clan-elders, or the leaders of a guild.” RH Van Gulik, Crime and Punishment in Ancient China, pp. 57-8

2. In Chinese beliefs, not being interred, after death, in one's home province is considered very bad because the dead might become a wandering ghost who tries to regain their home province.
Life exile may hence not seem a harsh punishment to us but it's actually harsh in the eyes of the Chinese of the time.

3. Capital punishment can only be carried out if confirmed by the Emperor. In all other cases, the sentence is commuted to another punishment.
There are many degrees in capital punishment: strangulation, decapitation, and the death of a thousand cuts. Again because of the Chinese belief that a mutilated body leads to becoming a guǐ in the afterlife, strangulation is deemed a lighter sentence than decapitation, which in turn is deemed less harsh than the death of a thousand cuts.
Capital punishment can also only be carried out at certain times of the year.
Hence, all in all, it seems that only about 10% of all capital sentences are actually carried out.

Posted by 賈尼 at 18:57
Email ThisBlogThis!Share to TwitterShare to FacebookShare to Pinterest
Labels: background, Qing