In Chinese folk religion, Jade Boys are divine servants of the Jade Emperor, acting as his ears and eyes in Heaven and on Earth, since the Emperor never leaves his heavenly palace. 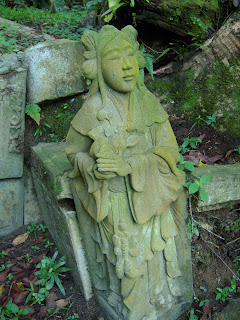 A Jade Boy simply wills himself somewhere, and he is instantly transported to that place, unless some exceptionally strong magic prevents him from doing so. Since both the Orthodox and Heterodox Daoist traditions recognise the suzerainty of the Jade Emperor, and since a Buddhist would not interfere with the Jade Emperor's will, such magic must necessarily be of demonic or foreign origin (or both).

A Jade Boy can grant any wish, provided the Jade Emperor empowers him to do so. What usually happens is that, during an errand on Earth, a Jade Boy will meet a mortal in dire need of help. After having enquired about the needs of the person, and if he is moved by his or her plight, the Jade Boy will usually travel back to Heaven, wait for an audience with the Jade Emperor, and expose the person's problem and the solution he has thought of. If the Jade Emperor agrees to the solution, the Jade Boy is allowed to travel back to the petitioner and grant him or her a wish. Petitioners helped in this way are obviously always pure-hearted people with high an Allegiance score (>50) in one of the purely Chinese allegiances (Chinese folk religion, Daoism, Heterodoxy).
Posted by 賈尼 at 16:05
Email ThisBlogThis!Share to TwitterShare to FacebookShare to Pinterest
Labels: creature, religion