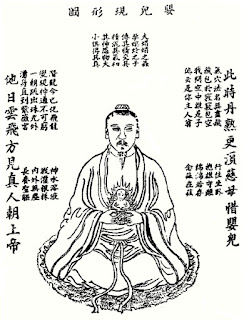 One area in which I must recognise that The Celestial Empire is wanting is Alchemy.

Chinese Alchemy is a complex and all-encompassing subject. Any description of Chinese Alchemy should touch upon Chinese history, because of its very long tradition, with roots in the most distant past; cosmology, because of its strong links with the fundamental notions of Qì, Yīn and Yáng, Wǔxíng; religion, because it is closely linked with Daoism; Traditional Chinese Medicine; Martial Arts...

It had been my firm intention upon starting working on The Celestial Empire back in 2000~2001 to have Chinese Alchemy play an essential role in the rules, at least as regards the chapters devoted to magic. However, as the rules began to take form, it became obvious that the task would be quite daunting. Also, because of the engine I had chosen (Chaosium's Basic Role-Playing System), any Alchemy rules I could write with the intent of remaining in the vein of the other BRP-inspired role-playing games simply looked too "European", whereas my aim really was to portray Chinese Alchemy as closely as possible to its real-world counterpart.

I had a draft system of which I was quite dissatisfied, so I discarded it. Then I had another, more playable, but still too European in flavour, so this got discarded too. Then I went for the easy solution and simply renamed the BRP Science (Chemistry) skill as Science (Alchemy) and added it to the skill list. This is the one on p59 of the rule book. This is also still unsatisfactory because, as it is described in the BRP book, the skill is still centred on poisons, gases, etc., just as my first attempts were.

I still hope one day to publish a real, satisfying, TCE supplement on Chinese Alchemy. It will have to be a supplement because, as written at the beginning of this post, there is so much involved.

In the meanwhile, I suggest you download a free copy of the 60-page PDF titled The Way of the Golden Elixir: A Historical Overview of Taoist Alchemy from Fabrizio Pregadio's blog. This short primer will give you an overview of internal and external Alchemy, of its Daoist origin, and of its change over time, from Antiquity to the Qīng — it will also let you realise why it's such a daunting task to translate all this into gaming terms!
Posted by 賈尼 at 21:59
Email ThisBlogThis!Share to TwitterShare to FacebookShare to Pinterest
Labels: alchemy, background