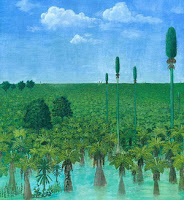 The Celestial Empire is targeted at historic or semi-historic games, or at least at campaigns consistent with Chinese literature, myth and legend.

Yet the recent piece of news published on the technology weblog Gizmodo about a 300 million year-old forest that has been discovered under a coal mine in Inner Mongolia has spurred me to write this short post about a "Hollow Earth"-themed campaign game. The "Hollow Earth" hypothesis, which posits that the Earth is hollow and that it contains a prehistoric or otherwise ancient world in its interior, does not appear in Chinese literature, myth or legend at all; on the contrary, it is a staple of Western occult. However, given the interest of many Western occultists for all things Tibetan, it could well fit in a TCE campaign, albeit an over-the-top one.

The idea is for the GM to have the players stumble upon the entrance within a cave for the subterranean kingdom of Agartha, which is ruled by an ancient lineage of über mysterious lamas and/or inhabited by Asura (see p123 of TCE).
Agartha would have lush prehistoric forests, strangely-coloured lakes, and obviously prehistoric animals (dinosaurs and Pleistocene mammals), which would provide some tough opposition to the player characters!

The subterranean kingdom of Agartha might or might not be connected with the underground City of Ghosts (Fēngdū), which could spell further trouble for the player characters...
Posted by 賈尼 at 16:50
Email ThisBlogThis!Share to TwitterShare to FacebookShare to Pinterest
Labels: scenario seed