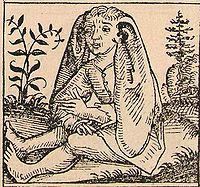 OK, this is from a European perspective, so rather inconsistent with the Chinese bias I've chosen for The Celestial Empire, but it still may be fun, especially if you're leaning on a more 'high fantasy' view of frp.

Via Phersu, I have retrieved a nice map of Asia that encompasses all the mythical places visited by Jehan de Mandeville. With little work, it could become a great high fantasy setting for East Asian adventuring.

Suggested gazetteer (using the key from the map):

- Empire of Prester John. This is a large Christian empire practising Nestorian Christianity (see p39 of TCE). It might have a European-like social structure, in which case the GM should use a 'classic fantasy' or a European sourcebook (e.g., Crusaders of the Amber Coast), or it could have a standard Central Asian society but with a Christian touch.

- Empire of the Grand Cham of Cathay. This is simply Yuán China as imagined by the Europeans of the time; 'Cham' is a mispronunciation of 'Khan', the title of the ruler of the Mongols. Tartary is Mongolia, Serica is North China, and Mangzhi [sic, this should actually be spelt 蠻子 Mánzi] is South China.

- the Realm of Gog-Magog (“Here Be Monsters”). This land is separated from the civilised lands to the west by the Iron Wall, a Great Wall of China-like series of fortifications built by Alexander the Great to keep the monsters of Gog-Magog from invading the western lands. These monsters could be goblin-like, should the GM want to add elements of classic fantasy to an East Asian milieu, or they could be drawn from p123-6 of The Celestial Empire. Note that Gog-Magog is probably the inspiration behind the Shadowlands and the Carpenter Wall of the Legend of the Five Rings role-playing game, so you may also use material from that game to set adventures in the Realm of Gog-Magog.

- Land of Perpetual Darkness (#3, Asia). This is the Forest of Darkness from various Central Asian legends. It holds many wondrous treasures but once one has entered it, it is extremely difficult to leave it. I would place it in Western Siberia (p28 of TCE) rather than in the Caucasus as on the map.

- City of Birds (#9, Asia). This is actually a city of yǔrén (p123 of TCE), mistaken for birds because of their plumage.

- The Bewitched Hills (#10, Asia). This is a rolling land so agreeable that any traveller arriving here loses any desire to leave it. In gaming terms, on the first day in the Bewitched Hills the traveller must roll his POW vs 13 on the resistance table. In case of failure, he cannot leave the country. In case of success, he may stay or leave, but the roll will be vs 14 on the second day, and so on.

- The Terrestrial Paradise (#11, Asia). This is actually a huge caldera with a large vent in its centre that gives access to Agartha and to its capital city of Paradesa — the resemblance between the names 'Paradise' and 'Paradesa' could explain the equivocation!