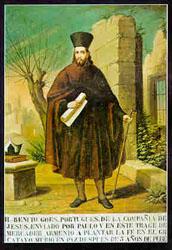 Bento de Góis was a Portuguese Jesuit missionary who was active at the turn of the 17th century, at a time when it was still unclear in the West whether "Cathay" and "China" referred to the one and same geographical entity or not. He was also fascinated by the legends of native Christian peoples living in Inner Asia (e.g., the legend of "Prester John"). He is the first Westerner to have travelled overland from India to China.

Bento de Góis led an adventurous life from early on. He was a soldier, and saw action against the Spaniards. When stationed in the Portuguese Indian city of Goa, nicknamed the "Rome of the Orient" because of its intense Catholic activity, he abandoned the secular world and entered the Society of Jesus, possibly because his fiancée back in Portugal became a nun at that time. Bento de Góis was then assigned missionary work in Mughal India for several years, which enabled him to become proficient in the Persian language and in Muslim customs, because he sometimes had to hide his true religion.

At that time, the Jesuits were busy trying to convert the Japanese to Christianity, with very little success, yet undergoing mass persecution at the end of the Sengoku period. Noticing how the Japanese were in awe of everything Chinese, the Jesuits then thought that converting the Chinese would be the key to converting all of East Asia, and hence turned their attention to China, where some Jesuits were already active at the court of the Míng. However, because of various setbacks, the sea route revealed itself to be impractical for missionary activities. As a result, it was decided to send missionaries to China through Tartary — the first European attempt ever to travel from India to China overland. The idea was also to take advantage of the inland trip to ascertain whether there were any native Christians in Tibet and/or in "Cathay" (at the time supposed to be different from "China"), even though the Jesuits in Běijīng doubted that such peoples did exist.

Bento de Góis left North India in February 1603 with the annual caravan bound for the Uyghur trading centre of Yarkand (Shāchē 莎車), situated in a fertile oasis of the Tarim Basin. The trip would last 4 years and Bento de Góis would cover 4,500km. He left Lahore disguised as an Armenian merchant intent on travelling to China on the Silk Road. The caravan went first through Bactria, experiencing the terrible cold and dangers of the Pamirs. In Bactria, Bento de Góis made the acquaintance of several Uyghurs who were returning from the pilgrimage to Mecca and who were also bound to Yarkand. At the time, the Silk Road was but a shadow of its former self, and was plagued by bandits and marauding nomads. Bento de Góis carried arms, and helped defending the Uyghur pilgrims. As a result, he was much welcome in Yarkand, especially since one of the pilgrims was the very sister of the Uyghur ruler of Yarkand. 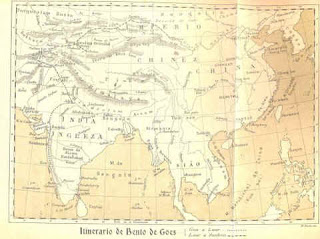 After having rested in Yarkand, Bento de Góis travelled through the desert to the oasis city of Aqsu (Ākèsù 阿克蘇) in western Dzungaria. Despite Aqsu's ruler being related to Yarkand's, Bento de Góis was ill-treated in Aqsu and virtually kept there as a prisoner. After paying a huge ransom, however, he was allowed to leave. His next stop was the oasis city of Karasahr (Yānqí 焉耆), in eastern Dzungaria, where he could ascertain that a Nestorian community had indeed existed in the past, but that none were left in his day. There, he also met some Uyghur merchants who were travelling back from Běijīng, and who confirmed him the presence of fellow Jesuits at the court of the Míng. After some time spent preparing the last leg of the expedition by buying jade so that he could pretend being a merchant, Bento de Góis left Karasahr for China, reaching the Great Wall at the end of 1605. The Míng Empire had very restrictive rules for foreigners' entry into the country, and Bento de Góis was detained by the Chinese authorities in the city of Sùzhōu (肃州) in Gānsù. From Sùzhōu, Bento tried to send messages to the Jesuits in Běijīng, but he did not have their exact address, and he could not write Chinese. On the other end, the Běijīng Jesuits (informed about de Góis's expedition by his Goa superiors) were making enquiries about him from people coming from the west, but could not learn anything either, since they did not know his assumed 'Armenian' name. One of Bento's letters, sent in the first half of 1606, eventually found its way to the Běijīng Jesuits at the end of 1606. Matteo Ricci, the chief Jesuit in Běijīng, promptly sent a Chinese convert fetch his Portuguese colleague. The latter arrived in Sùzhōu at the beginning of 1607, only to find Bento de Góis on his deathbed.

The travels of Bento de Góis are humbling for us gamers. They make us realise how very difficult and very dangerous it was to travel, even through 'civilised' lands. In terms of using this narrative with The Celestial Empire, a GM could simply re-use it as is for a long overland campaign (a giant hexcrawl!). Alternatively, the PCs could be native Chinese in the employ of Matteo Ricci who must go to Sùzhōu and organise Bento de Góis's escape.
Posted by 賈尼 at 14:44
Email ThisBlogThis!Share to TwitterShare to FacebookShare to Pinterest
Labels: history, Ming, religion