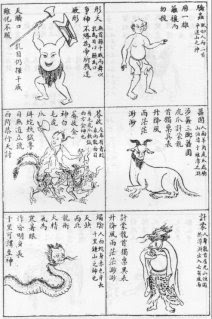 The book does not follow any plot. It simply describes various real and mythological locales along with their many fabled inhabitants, mostly monsters or people with strange customs. In this respect, it is very much similar to European mediaeval bestiaries. The Shānhǎi Jīng hasn't had much influence on Chinese fantasy or wǔxiá fiction; this is why I haven't used the creatures described in the Shānhǎi Jīng for The Celestial Empire. Some of them will appear in this blog over time, though.

A longer description of the book, containing some excerpts, may be found here.

The Shānhǎi Jīng is available in English in two editions:

Posted by 賈尼 at 14:18
Email ThisBlogThis!Share to TwitterShare to FacebookShare to Pinterest
Labels: background, SHJ