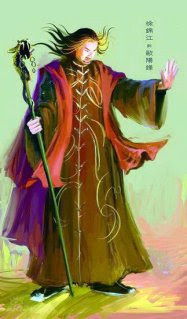 As written on page 83 of the rule book, The Celestial Empire has been written with Chinese fantasy and wǔxiá fiction in mind, neither of which feature exaggerated magical feats, at least not by the hands of mere mortals.

As a result, a GM who would like to run a campaign featuring powerful spell casters might be disappointed with the overall level of the spells presented in The Celestial Empire. This post will give some ideas to game masters who want “high level” magic.

The GM should procure the Chaosium monograph Basic Magic; this supplement contains a chapter called Divine Magic (p22), which describes a magic tradition much more powerful than The Celestial Empire's Battle Magic.

To remain in phase with The Celestial Empire's approach to magic, the Divine Magic from Basic Magic should only be available for campaigns set in China's mythical past, when Immortals would dabble in human affairs, or for really high-power campaigns in Imperial China centred on Chinese mythology rather than Chinese history or literature.

Here are a few ideas of who may cast which spells in a high power Celestial Empire campaign, targeted towards very powerful characters such as Tibetan reincarnate lamas, Daoist Celestial Immortals, or vampire-creating demonic sorcerers.