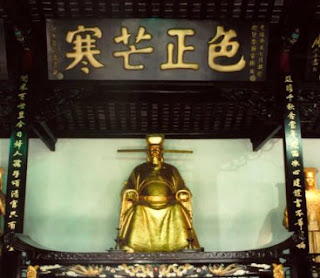 Chinese Folk religion is a religion without an organised clergy. As a consequence, worship to Bāo Gōng is not performed by professional priests; his temples are built and maintained by wealthy residents of the neighbourhood, and obviously by the local judge and any other officials residing in the area.

Popular worship to Bāo Gōng is conducted through representations of Chinese opera with an actor disguised as Bāo Zhěng, and through the fictionalised accounts of his deeds as told by travelling story-tellers.
Posted by 賈尼 at 11:32
Email ThisBlogThis!Share to TwitterShare to FacebookShare to Pinterest
Labels: background, religion, Song