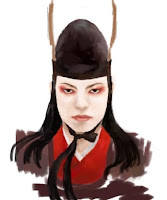 Historically, the Huāláng (花郎, "Flowery Gentlemen") were a society of young and beautiful aristocrats from the Korean kingdom of Silla (Xīnluó 新羅), contemporary of Táng China. This is the only hard fact that can be historically confirmed, given the paucity of the sources. Little writing has survived from Silla Korea; anything else is pure speculation.

Later on, the term Huāláng came to mean: in the 13th century, 'travelling entertainer'; in the 16th century: 'male prostitute'; in the 19th century: 'boy dancer'. In the 20th century, a Korean martial arts known as Huālángdào developed, mostly in reaction to foreign martial arts. As a result, a whole Huāláng mythology was 'retro-developed' to be used as a historical basis and justification for the latter-day Huāláng (practitioners of Huālángdào). Little of this 20th-century Huāláng-mythmaking has any historical evidence whatsoever. However, gaming being gaming, we'll try and incorporate much of this more recent Huāláng mythology into The Celestial Empire.

The Huāláng started as a military band in the Silla era. The Huāláng were chosen from the young sons of the nobility; they entered a kind of chivalric corps whose aim was to uphold the ideals of complete loyalty to the nation, righteousness, and bravery: the five huāláng commandments were: serve the king with loyalty, serve parents with piety, be faithful to friends, never retreat in battle, preserve life when possible. The Huāláng were dressed up in black jackets and red skirts. Besides their martial training, they were trained to attack and drive out disease demons through exorcism. [Note: this latter skill may actually stem from a linguistic confusion between the terms huāláng‒ flower knight and huāláng‒ husband of a female shaman, so we'll ignore it in the description of the Huāláng profession below. Should the GM allow this ability, the Necromancy skill should be added to the roster of primary or secondary skills of the Huāláng profession]. The Huāláng carry wooden sticks representing swords. They are supposed to have a power to heal. They have a taboo concerning water.

From a religious point of view, the Huāláng were taught a strange mix of orthodox Confucianism and Esoteric Buddhism. This makes them all the more similar to the Japanese Ninja (the unavowed model of 20th century Huāláng), whose religious tenets were also based on Esoteric Buddhism.

Despite their Confucian upbringing, the Huāláng are mostly homosexual. This is not surprising;  many groups of closely-knit warriors in the past were homosexual.