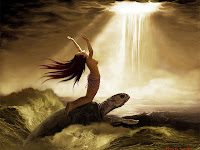 Girl Lovely (Nǚ Wā 女媧) is a semi-historical figure mentioned in the Classic of Mountains and Seas (Shānhǎi Jīng 山海經) as a daughter of the Flame Emperor (Yándì 炎帝). She used to live in the northern regions and died by drowning in the East Sea, after which she was apotheosised and became a water goddess, worshipped by both the ancient Chinese and the Miáo. However, in the time periods contemplated by The Celestial Empire, Girl Lovely is not worshipped as a goddess any longer; she is rather considered as a mythological creature from the ancient past, much like the Droughtghoul (Hànbá, p118 of TCE) or the Plain Girl (p121 of TCE).

Even though Girl Lovely wasn't a goddess any longer in historical times, she still held great power. The downfall of the Shāng dynasty, for instance, is said to have been caused by the last Shāng ruler disrespecting her statue. She then sent the evil vixen spirit Dájǐ wreak havoc at the court of King Zhòu. These events are told in the Míng dynasty novel The Investiture of the Gods.

The GM can use Girl Lovely as an actual creature, a lamia-like temptress who tries to bewitch one of the characters and set him on the others. Or, as in The Investiture of the Gods, the PCs may stumble upon an ancient temple of Girl Lovely, and unwittingly call some curse upon themselves by reading some forbidden scripture; the rest of the adventure would consist in lifting the curse by fulfilling some quest for the goddess.
Posted by 賈尼 at 22:57
Email ThisBlogThis!Share to TwitterShare to FacebookShare to Pinterest
Labels: creature, SHJ