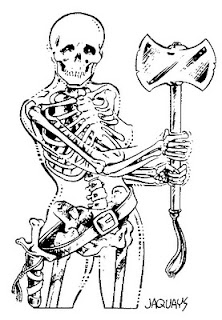 Despite their name and their appearance, White Bone Demons are not demons nor undead, but a humanoid race with translucent skin and organs. In a distance, only their skeleton can be seen, hence the misnomer. This is usually enough to cause most opponents flee in terror. Upon close inspection, and  in broad daylight, the translucent skin and organs can be dimly seen, and the white bone demon is exposed for what it really is: a mere humanoid creature.

A white bone demoness features prominently in the Journey to the West. She is constantly trying to confuse the protagonists so that they fail their quest, using all kinds of tricks, mainly illusions, since Báigǔjīng can create illusionary faces to appear as normal people (and then hide the rest of their translucent body using loose habiliments). A white bone demon will usually avoid hand-to-hand combat, relying on its tricks to harrass or drive away opponents.

Báigǔjīng inhabit the wastelands between China and the Barbarian lands that surround her.

Spells:
Battle Magic: Illusion 80% [limited to own face, see above]

Posted by 賈尼 at 09:51
Email ThisBlogThis!Share to TwitterShare to FacebookShare to Pinterest
Labels: creature