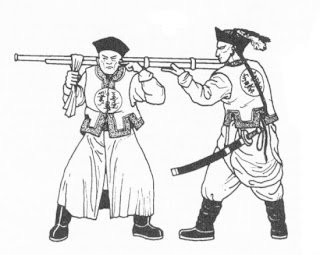 In terms of a rules engine to power your Celestial Empire games, I have already mentioned RuneQuest 6 as a viable alternative to the Basic Role-Playing 'Big Gold Book'.

RuneQuest 6 has been available for a few months now, and I really wish I had the time to write an in-depth study of the consequences of using RuneQuest 6 as the engine of your TCE games. Some day I hope I'll be able to post something.

In the meanwhile, I really urge you to download the free Firearms supplement for RuneQuest 6 on the Design Mechanism's web-site.

Page 12 should be of particular interest for pre-European contact games, or for encounters with very early Portuguese or Dutch colonists.
Posted by 賈尼 at 23:08
Email ThisBlogThis!Share to TwitterShare to FacebookShare to Pinterest
Labels: additional rule, gaming aid, industry