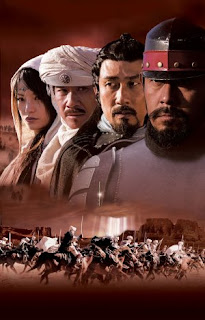 Warriors of Heaven and Earth is a 2003 Chinese adventure film set on the Silk Road in Táng China. The film really, really unfolds like a Celestial Empire adventure: there is an adventuring party, with different professions (soldier, caravan guard, outlaw, Buddhist monk); there is a mission: safely bring the relics of Śākyamuni to Cháng'ān; there are the bad guys: the Göktürks; there are several pivotal scenes set in as many locales: the fight in the oasis city, the fight in the gorges, the flight through the gulley and the secret cemetery, crossing the Gobi Desert, the last stand in the abandoned fortress. The last scene involves an amazing array of different Chinese weapons, including firearms. You don't want to miss this film, it's truly a TCE player's dream come true. There's also a rival adventuring party to the main protagonists'... this almost feels OSR!

The film features gritty, manoeuvres-heavy combat scenes without wire-fu, and no spells or other supernatural powers [SPOILER: except at the very end], so again it is very much in line with what a player of the Basic Role-Playing System would enjoy, as opposed to other styles of role-playing.

The film has spawned a MMORPG in China, which is testament to its high "role-playability".

Oh, and did I mention the film features the delicious  Zhào Wēi  ^_^
Posted by 賈尼 at 18:49
Email ThisBlogThis!Share to TwitterShare to FacebookShare to Pinterest
Labels: film, Tang