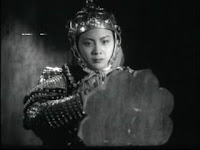 I have found myself watching Disney's Mulan... It made me think about the gender-based limitations in The Celestial Empire (see the side-bar on p10 of the rule-book), and about how playing a heroine disguised as a male would be pretty much the only way of having a female PC in an adventuring party.

Mùlán is quite a popular character in Chinese lore, and there have been numerous films about her (legendary) story. The image on the left is from a 1927 silent film.

Edit: Funny I should read about women warriors in ancient China on my G+ stream the very same day I post about Mùlán.
One of the entries on G+ referred to this book. In Chapter Three, titled From Cross-Dressing Daughter to Lady Knight-Errant: The Origin and Evolution of Chinese Women Warriors, the author writes that


Among the many heroine types types in Chinese literature, women soldiers, wandering lady "knights" (xiá), and female outlaws occupy a unique position [...]  the women warriors of medieval China were the Chinese paradigms of female courage and heroism for Chinese girls to emulate.


If you manage to display the free excerpts of the book on Google Books, they are well worth reading.
Posted by 賈尼 at 12:41
Email ThisBlogThis!Share to TwitterShare to FacebookShare to Pinterest
Labels: miscellaneous